Jerky Boys/It Takes One to Know One

We couldn't decide which title we liked better so we just put them both up there. Being the writer and editor has its perks, like the liberty to go on outrageous tangents like the one you're about to read.

We've written for UrbanDaddy in the distant past, and if you care to imagine what it's like to write for them, or any editor, from what we hear, it's probably similar to being raped. Or, like, imagine that you were working on a delicious pizza for some friends. And you took care to select high quality ingredients and placed them onto the pie ever so deliberately and precisely and then some guy comes in and grabs it roughly, starts to criticize the very essence of the pizza, complaining that you picked stupid ingredients, the shape is all wrong, inserts grammatical errors you'd never, ever make in a million years, I mean, bad ingredients like anchovies and raisins (actually that'd probably be pretty good), then passes it on with his crappy changes to another guy, and that guy puts it in a blender and then pours the slop out on the floor and serves it to your dinner guests and you have to tell them that technically you made it, but it didn't really come out as you intended. And they ask, "well, did you make it or didn't you?" That's kind of what it's like. Maybe more like that than rape.

We recently got in touch with Miamian, Jordan Barrocas, of Three Jerks Jerky, who moved out to LA to make fancy beef jerky with his best friend, Dan Fogelson. These two jerks -

Wanna hear about it?

EIM: Jordan, what's the deal dude? Why did you leave Miami and move to LA, which seems to us to be just a big annoying version of Miami with worse traffic and a ton of pollution? Plus, the ocean is cold there!!!

JB: Hey guys.  Thanks for taking the time to chat we with me.  Eat It, Miami is pretty cool and you guys are OK, so I’m stoked to be talking about jerky with y’all.  LA’s a cool city, it gets a bad rap but I like it a lot.  You’re right though, it is basically like a bigger and more traffic-y version of Miami just a few differences like swapping Mexican food with Cuban food, guys who say “brah” with guys who say “mang”, entertainment industry a-holes with well, everyone, the medical marijuana store with that guy from the restaurant and nightlife that ends at 2AM with nightlife that begins at 2AM.  Seriously though, Miami is my home and I love the city to death.  Next time I’m around we should get together, grab a drink and maybe even make some jerky.  It can be a good old fashion circle jerk.

EIM: Is there a strong Jewban population in LA? Because we don't know many people in Miami who aren't Jewish or Cuban or both. Even Colin Patrick O'Higgins is Cuban. Seriously. Maybe you've found your edge in LA...

JB: I once made a Reuben empanada.  It was awesome.  And also the most Jewban thing to ever exist in LA.  One day I’m going to open a Jewban Food Truck, thoughts?

EIM: We know from Kanye West that when you order "jerk," some insufferable wiseguy or gal will say "you are what you eat." Did you guys start out as jerks or did you just eat too much of your delicious jerky? And in describing your jerky as "delicious," we are making an enormous assumption, since, cough cough, we haven't been sent any samples... It also kind of sounds like we're hitting on you. Which we are not. We're mostly dudes over here and only a couple of us are gay, so it'd be wrong to hit on you on behalf of the entire crew. Just answer the question, Jordan. This is like when O'Reilly interviewed Obama that time before the most anticlimactic Super Bowl in history, for 49 of the 50 states, at least.

JB: No worries on the awkward flirting.  I think your cute, but not really my type.  Sorry.  I honestly have no idea where our name comes from...  My partner says it may have been inspired by me.  We were actually college roommates way back when, and since then, he has always claimed to hate me.  I don’t get it.  I love him.  Why does he hate me?  He’s a jerk.

We’ll get some samples out to you right away, but do need to give you a warning.  Eating our Filet Mignon Jerky may ruin all other jerky for you forever.  Eat at your own risk.  Also, in the meantime it’s in all three Epicure locations… 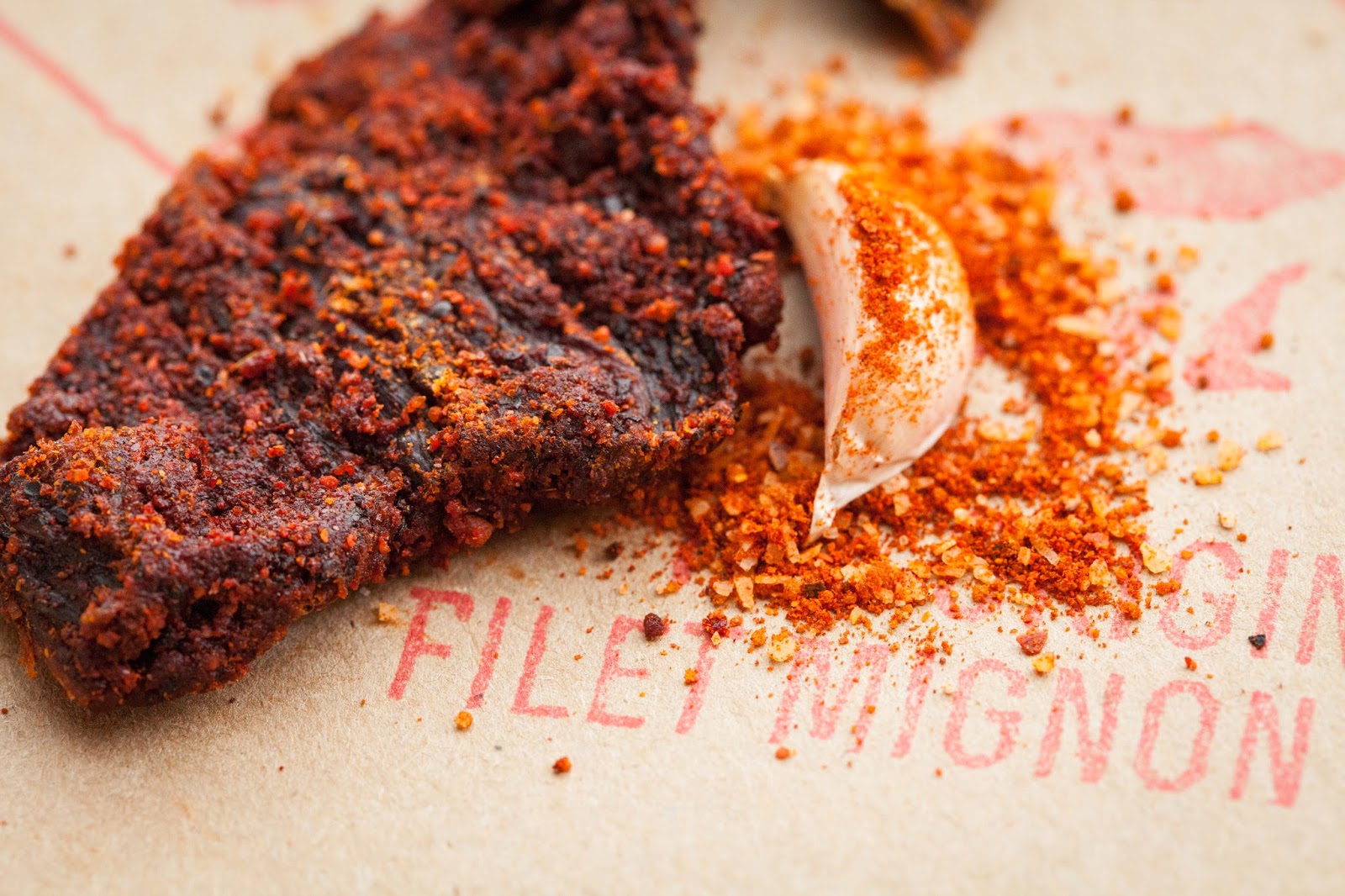 EIM: We respect the fact that you are boldly blazing a trail in creating a "premium" beef jerky product. But what happens when Puff Daddy (we're old fashioned over here at EIM) creates an "ultra premium" jerky? Will there be a new East Coast-West Coast beef (jerky)? Is this something you're willing to die for? Because we heard in a YouTube video once that, if you want to be successful, you have to want it more than breathing. Or something like that. That seems crazy to us, but we're not all that successful, and maybe that's why. But we are still breathing, so we have that going for us. Which is good.

JB: Puff Daddy has thought us many life lessons (especially from the No Way Out album), that we apply to our jerky business every day.  Trailblazing is hard work.  Everyone thought we were totally crazy to make jerky out of Filet Mignon.  But we just kept reminding ourselves that “Can’t Nobody Hold Me Down” and put our sights on creating a product that we envisioned and loved.  To some, “It’s All About the Benjamins” but to us it’s about pursuing our dreams and doing what we love. That’s what drives us every day.  It’s hard work and takes a lot of time.  Sacrifice is paramount and constant but we are reminded to “Don’t Stop What You’re Doing” and one day we will end in “Victory”

EIM: Who's the third jerk? Is it God? Seems blasphemous to us, but maybe he has a good sense of humor.