I don't go to Dave & Buster's very often, do you? I guess it's because when you live in Miami you usually go out to whatever cluster fudge is going on in town at the moment; most recently the douchefest that is Art Basel. When, on the rare occasion that there isn't some traffic nightmare inducing, politician pocket liner going on, you probably just meet up with friends for dinner and then head somewhere afterward for drinks. Maybe to a dive bar, like I prefer, or perhaps it's an overpriced nightclub in which conversing with one's friends is impossible because the music's so loud. There's a time and a place for both. I'd just say that if you want to foster meaningful relationships with the people you socialize with, you should probably be able to have a conversation with them when you're out. Otherwise, they're just some faces that you know and you haven't exactly forged a bond with a person on whom you can really depend. If you're some single 25 year-old, that might be what you're going for these days, but I'm old and engaged and my friends are all married and having kids, so that's where I'm coming from.

I wondered when I was invited to check out the newly remodeled Dave & Buster's and its ramped up sports bar concept, if the place would be lousy with kids, but I found the atmosphere to be quite comfortable. It's a lot better than Boomers, I'll tell you that much. It's not at all chaotic and the decor was always better than a Boomers, but the areas they've remodeled are pretty upscale. Check out the sports bar area in which my friends and I dined and watched the Heat trounce the Wizards. Pretty snazzy - 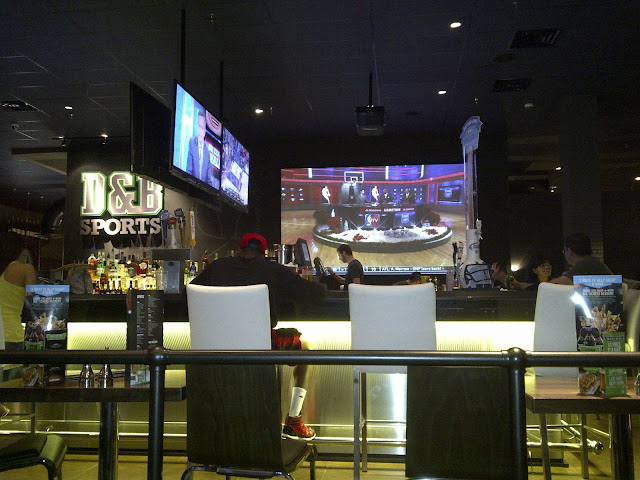 So the sports bar section is pretty adult, and even the areas where there are a lot of kids hanging out are more festive than anything else. There were several birthday parties going on for adults and kids alike, but it wasn't overwhelming or particularly noisy.

The food was good. Nothing fancy, but perfectly adequate. We shared an appetizer called 5:15. It comes with 5 pieces of a bunch of different stuff like quesadillas, chicken wings, fried shrimp. I ate the mini buffalo chicken sandwiches and others had seafood and chicken. We had a few cocktails among us, shared a delicious piece of chocolate cake for dessert and had a coffee. All in it was less than 35 bucks each. Can't do much better than that for a sit-down meal that includes drinks.

God forbid you should really have to go to the bathroom when you're in the sports bar, though, because the place is so freaking huge that it takes a few minutes to walk all the way to the bathrooms, located in the middle of the gigantic space. I can only imagine what kind of overhead there is at a business as massive as a Dave & Buster's. According to the extremely conscientious senior manager, Michael, there are about 200 people who work at the location alone. Gotta be great systems in place to get that many people working cheerily in tandem. And the employees really do have good attitudes there.

The massive gaming area is your typical amusement area with tons and tons of video games of all sorts. There are a few pieces that are getting a little worn out (and they should replace or remove, like the Big Game Hunter whose rifles don't work!), but you'll find plenty to do, whether you want to shoot at or race something. It's funny, even with all of the newer games that have been invented, my friends and I had the most fun playing old fashioned classics like Skee-ball, mini hoops, and that game where you put coins in the slot and try to shoot them at the ever-growing, teetering piles of coins, in the hopes of amassing more and more tickets so you can buy some junk you don't need at a price much higher than it would have been to just buy in the first place. But it's so much more fun that way for some reason.

There were some new ones we liked a lot, though, including the trivia game in which you try to be the fastest competitor to answer a series of 5 trivia questions (168 tickets if you're the fastest and get all five right!) and the giant Connect Four game seen here - 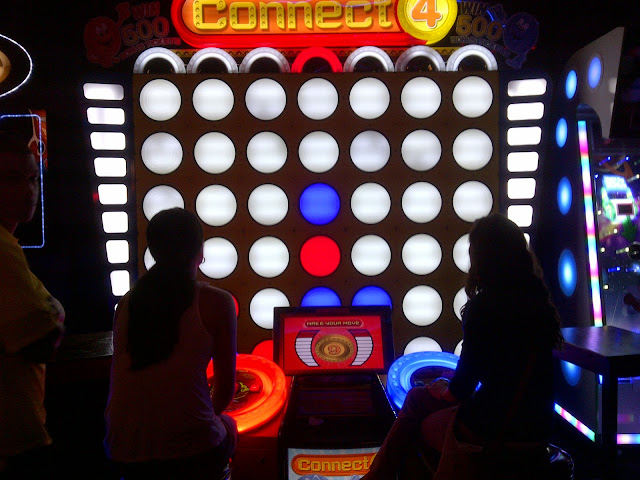 You can't beat the convenience and value of this place. You drive up, park easily, eat and hang out all night for $60 per person? Please tell me somewhere else that I can get that kind of a deal. I can't think of a comparable night out. You go to a Heat game and you spend that on parking and a snack, plus the additional cost of the tickets. You can go to a few places in town where you might spend only $60 on your meal, but there's no way you're getting the 5 hours of entertainment that we got out of our Saturday night at Dave & Buster's. I highly recommend it as an affordable family activity or night out with friends. Got kids? Take 'em. No kids? The ones who are there won't bother you.