Just like last year, the Miami Beach Botanical Garden, located here, is hosting a food truck court during its annual Garden Tour tomorrow, 3/17. This is a rare opportunity to sample some gourmet food prepared inside an automobile without driving over one of those terrible causeways that allow tourists and mainlanders onto our precious, precious tropical paradise.
This year's trucks are The Fish Box, Latin Burger, Sugar Yummy Mama, and my personal favorite, Gastropod. Glad that Cheeseme isn't there this year because last year when I volunteered at the event and finally had a few minutes to eat, I waited in their line for 15 minutes only to have some douchebag with an iPad tell me they were closing up and leaving an hour before the advertised time. Couldn't have told me that when I was at the end of the line? Seriously, screw that food truck. Whoever runs that business has no clue what he or she is doing. A couple of years ago they opened in the back of a nightclub with no license and now their Twitter account is no longer active. And I wrote a glowing review of that (unbeknownst to me) unlicensed restaurant! Who knows, maybe they got shut down again. Point is, they're not there. But Gastropod is!
Also, you should get tickets and tour the gardens of the wealthy people who are kind enough to let a bunch of strangers trample their grass to raise money for the Miami Beach Botanical Garden. You probably didn't even know it existed but it's a great place. Very good for events like big parties and weddings and it was recently renovated by superstar landscape architect Raymond Jungles (he did that really cool block of Lincoln Rd next to the fancy parking garage). Read below for details (click on photos to enlarge them for easier reading). 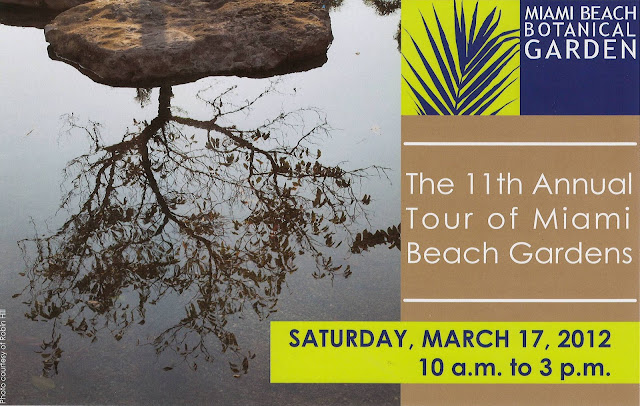 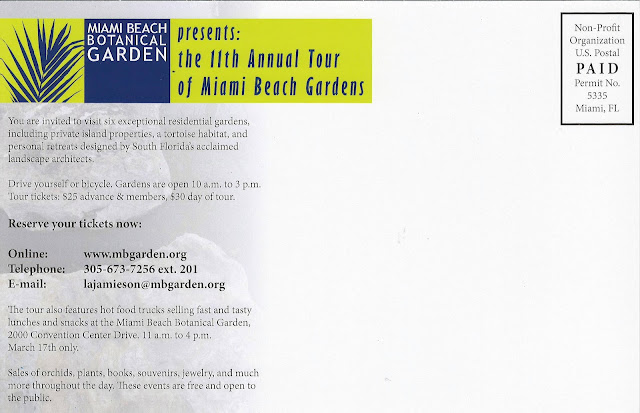 I have a feeling that people are gonna be all "you've never been to Taqueria El Mexicano before?!" Again. Look, I didn't grow up here. I used to come here like once a year to visit my grandparents when I was a little kid, then I spent more time when my parents moved here when I was at boarding school. And now I've lived here full time for like 6 years. So I'm catching up, alright people/mi gente?

We went there because my buddy Larry and I always eat tacos when we eat dinner together. We like to talk about music and politics and eat tacos. It's just our thing. It's pretty awesome.

Larry heard from someone that this place was good, but he didn't actually remember exactly what it was called or where exactly on Calle Ocho it was located, so we drove down 7th St (since 8th is one-way 'round those parts) until SW16th Ave before coming all the way back down Calle Ocho looking for the restaurant. It's only two blocks west of I-95, so no need to waste all of that gas. It's like $4 a gallon now, Larry! Good thing the place was so awesome.

Taqueria El Mexicano is a very casual dining experience. No table clothes or anything. Very "old fashioned downtown diner." You seat yourself and the waitresses come right over and take your order. The service was perfectly fine and our waitress was very friendly, but I could see the service getting slow on a really busy night. Though there was steady business last night, it was not packed.

We each got a bowl of pozole and a taco platter (3 for $7.50). So good! And cheap! That's what most reviews you read will say about this place. Like if you go on Yelp or one of those sites where people who are way less hilarious than we are give restaurant recommendations.

The food is just as good as Mercadito at about 1/4 the price. The tortillas are small and made of corn. The pozole is a little spicy and rich and flavored with tons of fat and has large hominy pieces. The tacos come in many varieties like cochinita pibil and al pastor. There are lots of other menu items that I'd like to try like their tortas and burritos and enchiladas. There will be many more opportunities because I intend to go back very soon. You can eat well for about 15 bucks at this place, even if you're a fairly big eater. That's a muy good deal and I highly recommend the place.

I'm going to post a couple of YouTube videos of two of my favorite Mexican songs now. Enjoy.

Driade, the furniture store? Eat it? Colin, are you nuts? What am I, a termite?

I know you're not a termite, dude. Inside the Driade store, there's a restaurant called Fratelli Lyon. I guess they must be French-Italian, or something. Maybe their ancestors fled Italy when Mussolini was in power.

I had a lunch meeting there last week and was quite looking forward to dining there, since I've driven past the place (located in the Design District) about 1000 times on my way to visit my dearly departed grandmother, who lived for 6 years at the nearby Miami Jewish Home. She wasn't Jewish, but it's the best nursing home in the area, or so I am told.

I expected my fellow customers to be douchey hipsters and bratty trust fund babies who drive Range Rovers way too fast on side streets and wear their sunglasses all the time, but they seemed to be mostly business people. So I guess I was kind of disappointed and relieved by that at the same time.

The service was quick and professional. We were seated immediately and waited on promptly and politely by a nice young Eastern European lady.

To drink, I had a Coke. They serve it in those little glass bottles. More expensive than fountain soda but it's way better out of the little bottle, of course. I'm pretty sure that everyone knows that.

Though the food was quite good, I found the prices a little high for such a casual dining experience. It really does feel as though you're eating in the middle of a furniture showroom and not in a restaurant. Almost like you're in a cafe at Bloomingdale's or something.

I ordered a delicious prosciutto, fresh mozzarella, lettuce and tomato sandwich on fresh toasty french bread (not on the online menu for some reason). It was excellent, though prosciutto is tough to eat in a sandwich. And I know that there's a chance I won't be able to take a bite without pulling out an entire slice of prosciutto, but I often order prosciutto in my sandwiches anyway. It's so chewy! The greens were French-style with a light and citrusy balsamic vinaigrette. Comes with a side of very good fries. The sandwich was around $14. Seems a bit expensive, doesn't it? Shouldn't it be like 8 bucks?

One thing I like to check when I intend to review a restaurant is the bathroom. If you need to use it, it's a rather important component of the enjoyment of the overall restaurant experience. And this one totally sucked. You walk around the corner to a back hallway and you feel like you're in that scene in Bad Boys when they're chasing the bad guys who just kidnapped Tea Leoni.

Amazing. That's the very clip I was looking for and it's the first one that came up when I searched for "Bad Boys Chase." The part I'm talking about starts around minute 2:20. Can you believe it's like that to get to the bathroom? I know, wild, right? Plus the door was propped open with a mop bucket and the fixtures look like they're made for a locker room from 1988. Not appropriate for a place that charges $14 for a sandwich, in my opinion.

That Bad Boys clip has so much great stuff in it, including a jogger who's wearing spandex that protrudes from his gym shorts like Andre Agassi used to do. Yes, somehow there's a photo of Andre Agassi Tebowing. The scene wraps up with a classic Michael Bay 360-degree camera shot of Will "Mike Looowery" Smith and Martin "Marcus Burnett" Lawrence after Mike saves Marcus from being run over by the bad guys. That's one of those movies you should really go back and watch if for nothing more than to see how much Miami has changed since 1995.

Try out Fratelli Lyon, even though the sandwiches cost $14. It's a cool venue in a trendy part of town and it's a lot more interesting than eating at Panera. I was just thinking that I probably shouldn't write that since I was recently invited to a Panera event and then went to look at the invitation and realized it was yesterday. That's too bad. Sorry I missed it. I'm pretty sure my Blackberry has failed me again on this one. And I actually like Panera, by the way, but you should try other things once in a while. Chains are great, but let's not eat at one every time we go out, ok?
Posted by Colin at Thursday, March 08, 2012 1 comment: