Do It - Art Basel, Miami, Not Basel, Switzerland

So, we're bougie and get tickets to Vernissage, along with the other 15,000 super VIP Miami residents who attend the annual sneak peak at Art Basel, the world's largest contemporary art fair.

If you're in the market for a large canvas covered in pencil scribbles or maybe a bunch of photos of homeless people's butt cracks scattered on the floor and covered in agave nectar, and you have a gazillion dollars or so to drop on one of those masterpieces, then Art Basel is your man, er, place.

I actually love most of the contemporary crap, but it doesn't mean I won't make fun of it.

This isn't a restaurant review, but we've gone over how you can go start your own blog if you don't like what we put here. Please don't though. There's already too much competition for everyone's precious, precious free time, and I don't need my readers to be distracted by some new hip thing you start. Good, it's settled.

Things we noticed at Art Basel this year -

They seem to be much stricter about the capacity, about half an hour into the event, since they were allowing people to enter only when some had left, kind of like we were waiting to get into Buck 15 on a busy night. An aggressive mom tried running us over with her baby's stroller.

Woh! So many people with facelifts. Like at least 50.

After spotting him, we heard several couples chatting about how they'd seen Christian Slater. We wondered if maybe he was flattered to still be noticed, since all he does these days is those Autotrader commercial voiceovers. That's Christian Slater?! Sure is.

We were noticing that one small gallery booth seemed to have something in the neighborhood of $100 million in art, having among their pieces several Picassos, Miros and Matisses. That led us to wonder how much all of the art in just the convention center must be worth. It's gotta be billions of dollars. How does one insure all of that? Surely, a catastrophic fire would cause irreparable financial harm as well as cause great losses to the art world and humanity at large. We are reminded year after year when Art Basel comes around that art is the most important thing in the world.

So, as pretentious as everyone acts at the events and how bad the traffic is, it's all worth it. You should go.

*Please go buy something from my cousin, Lowell Boyers. His stuff is totally awesome. He's exhibiting at Pulse in Wynwood's Ice Palace.

Also, I thought this was a nice message - 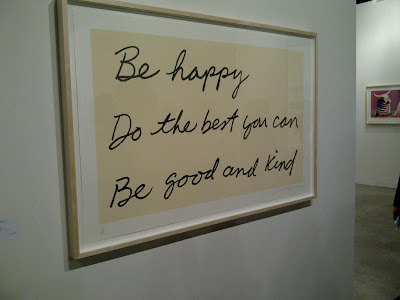 "Only kings, presidents, editors, and people with tapeworms have the right to use the editorial 'we.'"

Duh, richie, it's the editorial "we". Plus Renee was there with me! And also, I switched to "I" some of the time. Our bad.

I still have your Publix gift certificate, but I'm sure you shop at Fresh Market now anyway...

Oh, you wrote "editorial". But it's the ediTORial we. You see?