Eat It, Miami Went to France 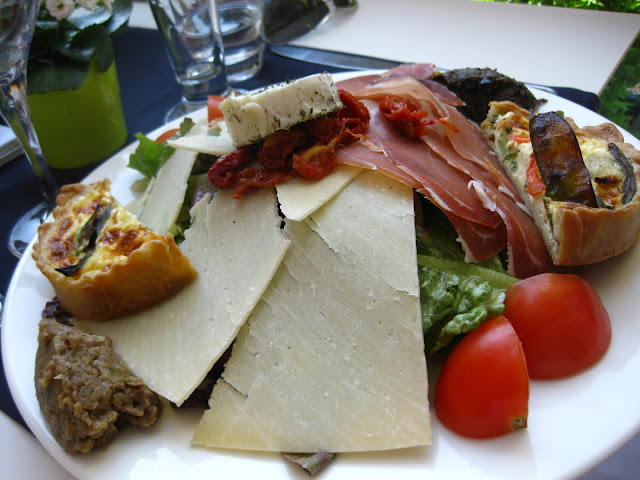 This is called a Cezanne salad. He painted a lot in Aix-en-Provence, a city in the south of France we recently visited to attend the christening of my dear friend's son. As you can see, the grateful people of Aix honored their favorite son by naming their most delicious and ridiculous salad after him. It has quiche in it. Quiche. In the salad. Along with cured ham, goat cheese, parmesan, eggplant caviar, olive tapenade, and other standard stuff like tomatoes.

I made the mistake of ordering this as a starter, which is called an entree in France. And the waitress didn't even have the courtesy to put her hands on her cheeks and say "mon dieu, oh la la! Vous avez un appetit tres grand, n'est-ce pas?" She took my order for a rib eye with roast potatoes and mushrooms as my main plate. See, they aren't complete grammatical morons over in France, so "entree" actually means appetizer, unlike here, where entree means "main dish," which is really stupid because you can probably sound out the word and figure out what it means.

So, though I'm complaining about the fact that they allowed me to order so much food, my superhuman appetite and metabolism easily consumed both, along with the remaining half of my girlfriend's dish. I probably burned most of the calories by worrying about how I was going to eat all of that. And by the time I had stood up from the table, I almost passed out and had to quickly get to a boulangerie for a pain au chocolat.

In closing, France is totally awesome and the food is delicious. You should go there some time. It's a lot more interesting than Vegas, a place where you'd spend the same amount of money to visit, though they don't speak English over there and that might cause you to use your brain. God forbid.

This post has taken an anti-American turn, and that's unfortunate. Because I absolutely adore this country, even though a lot of people here are pretty lazy and stupid. But that's everywhere. Anyway, I just wrote a beautiful poem for my mother for Mother's Day that involves a rhyme that's pretty patriotic. Oh, you'd like to read it? Well, ok. Here goes -

Bad news, these tulips didn't come in a vase.

Good news, Osama was shot in the face.
Morbid for Mom's Day a bit maybe.
But think of it this way if it cheers you up please.
Sharia Law prob'ly outlaws Cesareans,
Say all us whose mom's now a sexagenarian.
4 bundles of joy just a thought, they'd say.
If mean ol' Bin Laden had had it his way.
We've come to a conclusion, you wanna know what?
__________ can kiss all our skinny white butts!


So, to all the mothers out there. Happy Mother's Day from Eat It, Miami. If you're a ______, please don't be so offended that you have to prove to me that _____ is the religion of peace by threatening to cut my head off. Thank you.

That salad also has portobello mushrooms. I know, right? Ridiculous!

Anonymous, if you're going to scold me, at least identify yourself. Comment deleted, you coward!