Eat It, Boston is now live. I hope that my Beantown buddies will check it out. If you want to contribute, like my man Angus Beef III, holla atcha boy.
Posted by Colin at Saturday, March 26, 2011 No comments:

Just to allay any fears you may have had, dear readers, we have just this very moment received corrected html for the banner above. It now takes you directly to the Taste of Brickell website where you will feel compelled to buy many, many tickets to the event. I'm slightly distracted by footage of Kirstie Alley's dancing to "Forget You" on Dancing with the Stars, which is featured on the Pinheads & Patriots segment of the O'Reilly Factor. I always watch the 11pm replay. 8 is too early for me. I'm quite the night owl, don't you know. I'm thinking she'll probably get around 58% Pinhead, 42% Patriot. O'Reilly watchers probably aren't crazy about her, but she did a pretty darn good job of it, especially considering her challenges with keeping her weight down. Poor thing. So, tune in tomorrow night to see how our prediction fared! And go to the Taste of Brickell on Saturday.
Posted by Colin at Wednesday, March 23, 2011 No comments:

Email ThisBlogThis!Share to TwitterShare to FacebookShare to Pinterest
Labels: Dancing with the Stars

Since the banner they sent me doesn't link to the site, I'm putting it right here in the body of a post -

I could probably learn enough html to make the banner do just that, but I'm lazy and I don't feel like it. I think we've gone over the fact that this is MY blog and I shall run it how I please. Moving along.

Brickell's Food Fest should be slightly less of a you-know-what-show than the South Beach Wine & Food Festival. The latter's emphasis on "wine" is quite evident in the drunkenness of festival attendees. SoBe Ca$h Money a.k.a. South Beach Phantom Gourmet a.k.a. Dr. RidiQlis and I saw a young lady who became so inebriated while attending the South Beach event that she was unable to control her bladder before arriving at the restroom. Oh my.

The Taste of Brickell FOOD & Wine Festival should be a good time, with weather forecast to be gorgeous. It's only 5 bucks for general admission and 25 for VIP admission (which includes drinks and food), so it's a pretty cheap way to spend a Saturday in the 305.

Miami Beach residents! Do you feel deprived because you are unable to enjoy the wonder that is eating from a truck out in the street? For some reason, it's fun. It just is. Like overpaying for an ice cream novelty from a truck. It's exhilarating. Especially if you're some dumb kid. Or buying a beer at a beer truck. I'm sure those exist somewhere and I'm sure it's totally awesome. Don't they have beer trucks at country music concerts? I'm pretty sure they do.

I was hoping to enjoy some Cheeseme on Saturday night in Wynwood during Gallery Walk, but all of the hipsters in their flannel shirts and dark rimmed glasses had clogged the lines and rendered the waiting times up to 15-20 minutes. I had no patience for such terrible service. Truck food should be served in like a minute. Maybe 2. You think these trucks would survive in New York?

Back to those damn, dirty hipsters. They were also wearing skinny black jeans and Chuck Taylor's and they had mussy hair capped off with pork pie hats, too. And you know what else? They were talking about how Obama is waaaaay too conservative. And also how veganism is really weak and that you shouldn't eat anything that comes from the earth because that's like totally exploitative man. So, I don't know where they get their food from. I think I just said that they eat at food trucks. Forget that part.

Well the rest of us red-blooded Reaganites who listen to country music and eat apple pie and McDonald's should all go and get tickets to my angelic mother's brainchild, The Miami Beach Botanical Garden's 10th Annual Miami Beach Garden Tour. Somehow, through her unsurpassed sweetness I assume, she has convinced Miami Beach millionaire after millionaire to open up his or her house to the public for the purpose of raising funds to support South Beach's botanical haven from the madness and nightclubbing. If you're European, a nightclub is American for "Discoteque." The gardens you will see are spectacular. (There was even one on Indian Creek Island one time!)

Tickets may be procured he-a, for 25 smackers. They're 30 bucks on Saturday. And even if you don't buy a ticket, which means you won't be able to view the homes, you can still go to the Garden and enjoy the following food trucks (which is awesome because they're not allowed on Miami Beach, but will be on the grounds of the Garden):


Thats was literally copied and pasted from the website. I think they might want to look into a new web/graphic designer. Just sayin'.

See you at the Garden!

Awesome! (I just got home from celebrating St. Patrick's Day, in case you couldn't tell. I'm sleepy/hungry.)
Posted by Colin at Friday, March 18, 2011 No comments:

www.cafenuvo.com
I’ve always wondered exactly what the recipe is for a good restaurant. Some places mask mediocre food with superb service or the perfect ambiance (see: Landing, Scotty’s). Some places have a single dish that is so perfectly done nothing else matters (think blue fin toro carpaccio from Bond Street). Still others are just ordinary in every category but for some reason the sum of the parts keep me coming back. These are the naughty little buggers (note that this writer is using the 3rd definition of bugger from Merriam-Webster and in no way is accusing any hereafter mentioned establishments of being practitioners of sodomy) that perplex me. I like parentheses (and mojitos).
People come to South Beach for four things: weather, food, fun and drinks (Ed. note: cough, chicks with fake boobs). I say why not indulge in all of them in one spot.
Café Nuvó, situated on beautiful world famous Española Way (go back and read that again using your Robin Leach voice and it becomes much more convincing), has just enough of all of those to make up for any shortcomings you may find.
For the weather and the fun; sit outside so you can enjoy the people watching. There is ample shade in case you’re an early diner or pale like this writer. You’ll see tourists, locals, celebrities, club goers and that weird guy I see walking around with a white-headed capuchin on his shoulder. http://en.wikipedia.org/wiki/White-headed_Capuchin The drawback…it gets pretty loud during peak dinner hours which makes chatting with your fellow diners difficult.
For the food; remember that everything is relative. You’re not at Prime 112 and you are in a touristy area. That being said, $9 for an excellent example of lobster bisque (hello chorizo!) and $22 for a rather tasty and generous piece of skirt steak is just fine by me. You’ll rarely be amazed at how quickly the food comes out but hey, you’re sitting outside on South Beach…put down your cell phone and enjoy your mojito…
For the drinks; the menu has two pages of mojitos. Unless you’re Nick Nolte I wouldn’t suggest trying one of each. If you are Nick Nolte, I still love Blue Chips. The bartender is a muddler extraordinaire and letting the fresh sugar cane soak up the rum before you chew on it shows everyone around you how much of a mojito connoisseur, or barbarian with no manners, you are. I’m a classico or kiwi kind of guy. The last time I was there they made my tourist guest a watermelon version that was all types of good. I would prefer they weren’t $11 but hey, at least it’s not a $31 cocktail made from liquid nitrogen like you get at 1427 West Ave Miami Beach FL. “Oh you want your martini to be -320° F and undrinkable? My pleasure.”
So I say to you Café Nuvó: when it comes to a solid mojito, decent food and an enjoyable atmosphere, you and Ralph Macchio have something in common.

Please take about 3 seconds to answer our new survey on the upper right hand side of this page. Though I have been battling a migraine since this afternoon, I care so much about Eat It, Miami that I was unable to contain my inspiration to create surveys that reinforce things I already know to be true. Please note that ubiquitous is a word that you should already know and also that "bruschetta" is pronounced "bru-ske-ta" and not "bru-she-ta." This blog makes you a better person. Next survey will be about the worst things that can happen to you while you're out to dinner. Like the old oil and vinegar splash all over your favorite shirt. That's the worst! Or is it? We shall see, dear readers. We shall see...
Posted by Colin at Tuesday, March 08, 2011 No comments:

I don't know what The Hundreds is, but it looks like it's L.A.-super cool. They have wisely chosen new Goddess of the Hipster Vegans, Shay Maria, on a t-shirt, cleverly denoting the various cuts of meat on her body. 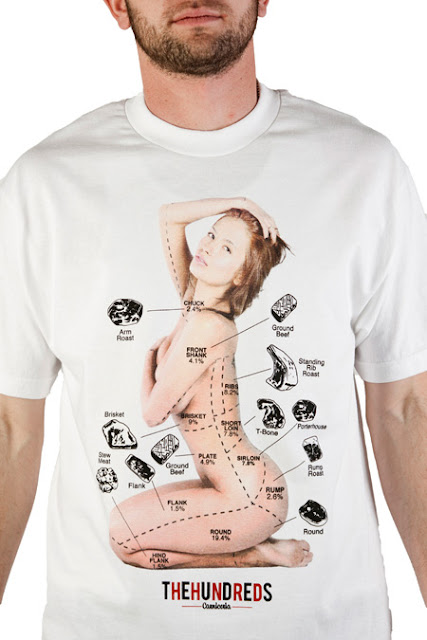