www.zensushilounge.com
Who likes sushi?
Who likes good quality sushi that won’t make you sick?
Who likes good quality sushi that won’t make you sick and is really really cheap?
Well, if you’re not sitstanding (http://www.fotosearch.com/LIQ115/vl0013b066/) in your seat with your right hand waving in the air and your left propping it up at the elbow, stop reading and go do something worthwhile.  If you are, however, then man do I have the place for you!  Zen Sushi is located in the MBV right down the street from “My name is Dolores but you can call me Lolita if you really want to, but does it really matter if I didn’t get your name, you can let yourself out in the morning, don’t wake me up, don’t call me, I’ll call you” and it’s the best sushi in Miami for your money.  You heard me, THE BEST.  Before I even write anymore, take a look at my bill from last night. 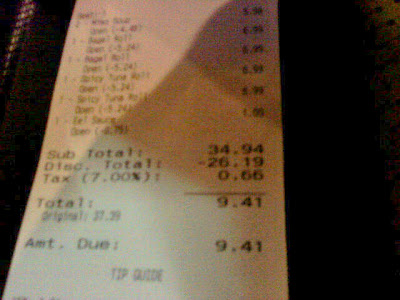 What?  Something shocking to you?  You mean, 75% off isn’t normal?  You’re right, I usually only get 50% off my bill when I eat here, and I’ve never gotten less than 50% off.  Every Sunday they offer 50% off the entire menu and on Wednesdays they have “Lucky Wednesdays.”  At the end of your meal they bring out a casino style wheel that you spin and get anywhere from 5%-75% off.  My lovah happens to be a professional spinster and sure enough we hit the jackpot. Wait a minute… moving on.
So what’s left to say?  The décor of the restaurant is suitable for a date with low lighting and a really fancy rock wall with water running down it.  Those are pretty cool and I’d like to install one in my apartment.  The televisions show obscure music videos that you would only see on MTV3 or MTV if it were 1987.  Even without the Sunday discount the food is reasonably priced (see World Resource Café on Linco-Ro) and the sushi tastes good.  I particularly recommend the roll formerly known as the “Don Corlone” roll.  I guess they got sick of the confused pronun-cif-i-cations of “KOR-LONE?” and finally reprinted the menus with the proper spelling of Michael’s last name.  There you have it.  Zen sushi is the best place in town to go eat so much sushi you’ll be asking for extra chop sticks to stuff the final roll down your rice and raw fish filled esophagus (disgusting, I know) without paying more than $30 per person.  The end.
Maybe.
Oh, I feel it’s only fair to point out a few irksome happenings that I have experienced in the 5 or so times I have visited.
One time the ovens weren’t working so they could only serve foods that could be fried, microwaved, or cooked in a rice steamer.
On any given Sunday it will take an extraordinary amount of time for your entire meal to arrive at the table.
They may even forget part of your order if you order more than one thing.
There are no Asians working at the restaurant.
Do NOT order the wonton soup.  Somebody spilled an entire bottle of sesame seed oil in it.
Your meal will come out plate by plate, meaning that if you go in a party of 4, one person could very well finish their meal before another person gets their first plate.
They recently fired the entire wait staff.
This didn’t help.
They used to have Don Corleone misspelled on their menu.
Perhaps they feel that since you’re getting 50% off they’ll take 50% off the service quality.  But I mean, come’onnnnnnnnnnnnnnn.  Honestly, if you go into it knowing that the service is going to be really really crappy, maybe they’ll surprise you and you’ll have a great experience!
I think they get a little overwhelmed on Sunday evenings by the number of people who roll in for the 50% deal.  Last night our service was impeccable.  Our waters never even went below half full.  Er, well, now that I think of it they didn’t refill our waters but if I had needed them to I could have easily found the waitress… because we were the only people there.
I guess what I’m saying is that you should definitely eat Zen Sushi (on Sunday at lunch or early dinner or Wednesdays if you want to take the wheel of chance for a spin).
Guest paragraph by Colin: Okay, SoBe Cash Money, I hear that the readers want to know what a sushi entrée would look like at Barton G. The concept of “Zen Sushi” is actually a pretty good place to start. They would turn the table into a Zen rock garden by covering it with tiny pebbles, and then they’d scatter 3 pieces of sushi among the pebbles and make you sit there and just look at it, contemplating the waste of money that is eating in their restaurant. This is all hypothetical, of course, and not meant to be read literally since we don’t want to get sued.
*This post was written by "SoBe Cash Money," but he's too busy wrapping up his PhD to format it on here. That's why I'm the editor. What can I say? It's my passion. Anyway, I don't want to steal the credit for all of his hard work.
Posted by Colin at Wednesday, February 16, 2011

We all know the proprietor of Eat IT Miami wouldn't go to a sushi place because of his allergies. Although I have heard stories of his participation in lobster torturing by way of sashimi.