Phillipe Chow, located in the Gansevoort Hotel on South Beach, is the restaurant equivalent of a night club. What's a night club, exactly? It's a cool, hip place with interesting, often trendy architecture. They play sweet tunes that make you want to shake your booty, money-maker, badonkadonk, or whatever it is back there that your momma may or may not have given you. I'm talkin' about dat ass. You hope there are lots of attractive people to look at and maybe hit on (if you're single, sinverguenza [that means "shameless one" in Spanish]).

The nightclub's main source of revenue is alcoholic beverages. The bottles of Grey Goose and Patron they're pushing are bought at wholesale prices just like the ones they have behind the bar at Ted's (the best bar in Miami, by the way). The difference is that the nightclub charges you probably 15 to 20 bucks for a cocktail while Ted's charges you 6 or 7. It's probably not a better cocktail, but you're paying for ambiance and exclusivity. And also lots and lots of plastic surgery.

This seems to be the idea behind restaurants like Mr. Chow and Phillipe Chow (who used to work for Mr. Chow, by the way, and now has thanked his former employer by opening up a block away from his Miami outpost). The food they have is perfectly good, but it's just Chinese food. It's kind of like if you served McDonald's in a fancy setting with tablecloths and waiters. You know what? That idea's not half-bad...

Maybe certain restaurants will become so exclusive that they only let you in if you order chafing dish service. You get a great table in the corner and they bring big buffet-style trays of food and you just serve yourself. There just might be enough douchey people in the Magic City to pull it off. It'd go something like this in line -

Bouncer (wearing fitted black suit, hair slicked back, has one of those nondescript foreign accents): Yes, may I help you?

Four Dudes In Line (still wearing shirts with big collars and diagonal checks even though they went out 5 years ago, hair blown out): Bro, it's just us four dudes.

Bouncer: Gentlemen. We have a very full club, I mean, restaurant. And four guys, I don't think this is possible.

Four Dudes In Line: Bro, we come here all the time, bro.

Bouncer: I will need you to buy one tray for each of you. Maybe fried rice, spring rolls, large pot of wonton, and several orders of our overrated, neon orange chicken satay.

Bouncer: Yeah, I don't get it either.

That's the deal at Phillipe Chow. The interior is sort of a Delano lobby-looking place. Billowy white curtains. White tables and chairs. All very clean and modern. The customers are mostly Russian. The staff is polite and attentive. Service is excellent. And the music is amazing. Who ever comes up with their playlists is a genius. Queen, Michael Jackson, Phil Collins, not Katy Perry, etc. The music was so good that it was actually distracting me from eating a little. Well worth it.

I alluded earlier to the chicken satay with its bizarre orange colored breading. They should do away with that. I have no idea why they ruin a perfectly simple dish like chicken satay that way. Chicken with peanut sauce does not need breading. The orange color they make it is totally unappetizing. Yet this is like it's "signature dish" or something. I don't get it. You may not know this, but I also hate Barton G and most people think it's the greatest thing to happen to food since salt.

The other stuff we ate was great. Not much better than PF Chang's, but better than Miss Yip's, which has been pretty mediocre since changing owners.We dined on beef wraps, a bit pricey at $19 for the appetizer. Wait a minute. That's really expensive. Velvet Chicken was a solid entree. Again pretty expensive at $44 per order (serves two). We also shared some Crispy Beef ($56) and some Vegetarian Spring Rolls. There was a bunch of delicious looking seafood that I couldn't eat, poor me.

Luckily, all of this was paid for by Chevy, who also picked my girlfriend and me up at home and chauffeured us to and from the restaurant in a brand new Tahoe. My girlfriend loved that because she's from Tahoe. What are the odds that we'd be picked up in a car named after her hometown? They've gotta be pretty slim.

Best part of the night? They printed up place cards for all of the food writers in attendance. This was a couple of months ago, by the way.  One of my 2011 resolutions is to get back to posting frequently once again. And also to stop hogging all of the weights at the gym. That's selfish of me. 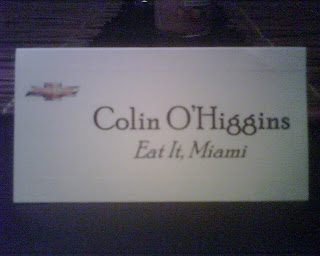