My good buddy, Nicky R, flew into Ft. Lauderdale from Beantown on Saturday, so I says to myself, I says, "we should swing by Dania Jai Alai and then grab a light snack at Jaxson's Ice Cream, just down the road.

Well, since I'm obviously a glutton and a buffoon, I decided that a root beer float would not be enough to sate my appetite, even though I felt as if I was going to die the last time I tried to finish one. Anyhoo, on top of the root beer floats we each ordered, Nick got a side of garlic fries, which I'm certain he can still taste, and I ordered some chili fries. I'm a sucker for chili fries.

Well, I might have had a chance at finishing my float, since I decided to consume as much of it as possible before the fries arrived, but lo and behold, the powers that be (Satan, obviously runs the place) decided that the root beer float, so large it is served in a pitcher, needs a side of root beer. I don't really know what else to say. Here's a photo (in which you can glimpse my freaky hitchhiker thumbs and snazzy new purple pin stripe shirt from Brooks Brothers. Purple is such a hot color these days. Also note the size of a "side" of fries at Jaxson's. Ha!) - 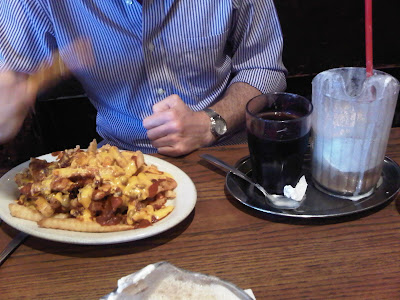 That enorumous plate of chili fries looks delicious. I especially like the eating a frie(sp?) action shot.