This is a great article about the goings on in the restaurant scene in our ever-changing city.

Miami Dining '09: Online for a Better Future
Posted by Colin at Thursday, December 31, 2009 No comments:

Pop Goes the Weasel
Get Your French On At A Cool New Cafe In The Heart Of Coconut Grove, It's The One You've Been Waiting For

You are so cool.

We mean it. Plus, you'll probably come back and read us again because we make you feel like the macho, urban, successful dude that you are. We'll keep it short, unlike the python in your pants, because we all have ADD now.

That's what they used to call you in Navy SEALS training.

Now that you've moved to the Magic City and become a real estate agent/luxury t-shirt designer/model, you, your iPhone and your two girlfriends want to go have a menage-a-trois right in the center of Coconut Grove.

We mean at a French restaurant.

Remember how we called you "Frog Legs" before? Yeah, well, they have those at Le Cafe Pop. But these ones didn't parachute out of a fighter jet onto the beaches of Bahrain to take out Saddam's sons. Iraq. Whatever.

Do yourself a favor and order a crispy Croque Madame sandwich. It comes served with a side of salad and fries. Get your Pulp Fiction on and dunk those pommes frites in some freshly made mayonnaise. Drown 'em in that stuff. A Croque Madame is a grilled ham and cheese sandwich with a fried egg on top.

We shudder to think what they put on a Croque Monsieur.

Posted by Colin at Wednesday, December 16, 2009 No comments:

Email ThisBlogThis!Share to TwitterShare to FacebookShare to Pinterest
Labels: French, The Grove

We're gonna call it "Dolores Lolita," just like they do in the website URL, because, to call the place by its full name would probably be bad for the environment for some reason. Did you know that, if Google made it's homepage black instead of white, then malaria would be eradicated in sub-Saharan Africa? True story.

I'll cut short the digressions this time. To the restaurant review!

Dolores Lolita seems to have found some sort or restaurant pricing sweet spot, located above Chili's and below, say, uh, P.F. Chang's? I'm using chains because I'm hoping the references will make sense to all of my "Eat It, Miamians." With such vast readership, it is important that I be sensitive to cultural and geographical differences. Plus, "Chili's" and "Chang's" provide nice symmetry, what with the alliteration and the fact that both are possessive nouns. But I can't tell what P.F.'s prices are because the website doesn't show them. I think it's kind of moderately expensive. Maybe the Chinese government is blocking that information.

Incidentally, Chili's new 3 for $20 deal is outrageous. You simply MUST try it. You get an appetizer, 2 main courses (Only a selection of them is available. Don't get the Quesadilla Explosion Salad. It sounds amazing, but it sucks. Mr. Chili, if you're reading this, please, please, don't use the word "explosion" in your dish unless it's really damn good.), and a dessert. You and your date will not be hungry after eating all of that.

If you're too good for Chili's, I'm not going to go so far as to say that you're "one of those Barton G people," but you probably call Taco Bell by the cruel and grossly inaccurate nickname "Taco Hell." It is for this reason that I have taken to calling it "Taco Heaven." Kind of balances out the universe.

What would a Barton G Tex-Mex dish be called, you're asking? Wow, you guys really hate that place, huh. Well, now that you mention it, I bet those epicurean elitists would whip up something called "...you know, these usually just come to me. Pop right into my head, but I'm struggling with this one. Hmm, how about "Spicy Bandido Burritos?" They bring out a big bean burrito, but while you're eating it, you have to wear two huge ammo belts. You know, like El Guapo - 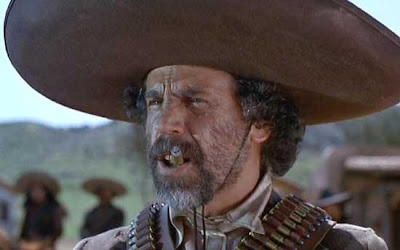 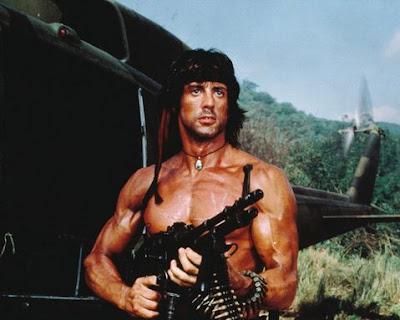 I don't know if you'd call what Rambo's doing "wearing them" but I thought it would be cool to put Rambo in here. He's awesome, that Rambo. Might be easier to eat your burrito if you wear your ammo belt like that. Do they call those bandoleros? I think they might, in which case the dish would be called "Big Bandido Bandolero Burrito." Now it's big instead of spicy. Well, it's still spicy, but it's not in the name anymore.

No good? How about "South of the Border Taco Salad Sombrero" and they serve you a bunch of lettuce and ground beef and cheese in a big straw hat? They also smear dirt on your face so you look like a real, live illegal immigrant who just got dropped off by a "coyote." I think that's what they call the dudes who smuggle people over the border. That's a big, fat fail, too? Ah, forget it. You win this round, Barton G.

So, you might be wondering what happened to getting to the restaurant review. I get easily distracted. That's why I wrote about Rambo in a review of a downtown Miami restaurant. Sly Stallone did live here for a while, so it's not totally out of left field. By the way, have you ever seen that movie "The Specialist?" It's one of those movies that's so bad that you can't turn away. It has Eric Roberts as the villain and Stallone's character makes a lot of calls from pay phones. It's probably Jeff Boden's favorite movie of all time. How on earth did this review get so long? I wish I were paid by the word like Charles Dickens. It wouldn't kill you to click on my banner ads, though, would it? Might give you cancer actually.

So, let's get to the restaurant, shall we? It's about time.

Because of the aforementioned perfect price point situation (I normally hate the term "price point" but I think it works here.), Dolores Lolita seems to always be packed. We went there on a Friday night and waited for like an hour and a half to be seated. This was after we were told the wait would be around 45 minutes. Wait, that's not totally accurate. At first we were told "sorry, we have nothing available." I was like "uh, so we have to go somewhere else?" The hostess then thought for a second and gave me the 45 minutes answer.

So, we went up to the rooftop and had a couple of drinks at the bar. It's lovely up there. Great views of all of the new buildings around Mary Brickell Village and there's usually a nice breeze. The bartender was delightful and the drinks were nicely mixed. So, as enjoyable as it was, our tummies were grumbling for some yum yums. What? That's what I say when I'm hungry! My girlfriend says it's adorable, so there.

Anyway, after waiting so long I was thinking it should really be called "Dolores But You Can Call Me Lo-late-a!" Zing! Just around then, we were seated. And for some reason, we got the best table in the place.

So, if you're unfamiliar with the menu at Dolores Lolita, it's always like Miami Spice. You get a generous appetizer and entree for either $18.75, if you choose from one list of entrees, or $23.75 if you choose one from the other. Desserts are $2.50. That's awesome.

Some dishes of note are the Caesar salad. It's huge and delicious. The main dishes are all good, I think. This last time I went, I had the pork shanks. Two fellow diners ordered the lobster ravioli and turned out to have gotten sick to their stomachs, unfortunately. I don't eat seafood anymore because of an adult-onset allergy, but that's the kind of thing I would probably have ordered in the past. Not sure if it was the creaminess of the sauce or if the lobster was bad, but both who ate it didn't digest it. Hey, better that than on the hips, right? O-oh!

One neat gimmick they have is that they include their gazpacho recipe if you order it, which is nice. I've been meaning to type it up, since they print it out like a receipt, and of course, over time, the ink degrades. This has already happened, like that photo of the McFlys (McFlies?) in Back to the Future. So, in case you want to make Dolores Lolita gazpacho, without disrupting the space-time continuum, here it is (I think. Some of it's blurry, like I said.) -

3-4 Lbs of tomatoes
1 Cucumber
2 Tablespoons of vinegar
2 Green or red peppers (This is strange to me because green and red peppers taste pretty different from one another.)
1 Clove of garlic
1 Cup of water
1 Cup of olive oil
3 Slices of bread
1 Pinch of ground cumin
Salt to taste

Blend all of the ingredients together and chill for at least 4 hours. Serve cold. (Serves 6)

I almost always order Malbec because I like to make my girlfriend happy and that's the only thing she drinks. At Dolores Lolita they range from 26 to 42/bottle. That's quite reasonable.

For dessert, they totally redeemed themselves by bringing us free tiramisu. It's some of the best I've ever had, but I think I say that every time I have tiramisu.

That's it. That's the review.
Posted by Colin at Wednesday, December 09, 2009 No comments: