If Dick's Last Resort comes to Florida, I hope it ends up in Orlando or at least Broward County. No offense, Broward.

If it does, this is my preemptive review -

AHAHAHAHAHA! How irreverent!
Posted by Colin at Friday, November 20, 2009 No comments:

Eat It is the name, we ahead of our game
Still, writing it sassy, but stayin' classy
Still not loving Waxy's (Uh huh)
Still getting in our sardonic licks
Still got love for the streets, repping 786
Still got hunger pangs, still doing our thang
We ain't left, ain't too much changed, still

Medium rare is the only way to cook your meat
And we still got love for the beach, it's the E-A-T [Repeat 2x]

waxy o'connors towed my car also while i was having lunch at the bar.it was before 6.00 pm and it clearly says everywhere "waxy's parking 8am -6 pm." bartender said 10 cars from costumers are been [sic] towed PER WEEK.i guess that's how they make their money since the bar is empty all the time.
Posted by Colin at Thursday, November 19, 2009 2 comments:

This is a text I sent just after leaving Jaxson's -

"I almost finished the root beer float and I think I'm going to die. I'm leaving you my copy of American Psycho."

I was obviously delusional because I plan on being cremated with my copy of American Psycho.

Anyway, Jaxson's is famous, I guess. I hadn't heard of it, but when you arrive, there's a line to get in the door and there are cheesy signs all over about how the restaurant has been featured on the Food Network and in Zagat's, blah blah blah. That suggested to me that it would be a tourist trap, but it's really worth checking out.

The smallest portion of ice cream that one can order is 2 scoops. These are no ordinary scoops of ice cream. Oh no. They are slightly less than a pint each and the ice cream, made at the restaurant daily, is extremely rich and creamy.

So, as you read earlier, I had a root beer float. Jaxson's is served in one of those mini pitchers and it has probably a pint of ice cream in it, topped with about 2 cups of whipped cream. It's placed in a large metal bowl because it's virtually impossible not to spill some of it.

If you're ever in the mood for a root beer float, I suggest going to Jaxson's before you've eaten anything. I made the mistake of going there for dessert, after brunch. I eat a lot. I'm skinny, but I eat at least twice as much as most normal people. I felt like I was going to pop after consuming about half of my float. By the time I got down near the bottom, I was pausing between bites, hoping against hope that I would finish. I decided I did not want to throw up in the restaurant, though I'm fairly certain that's happened before.

I'm imagining what a Barton G root beer float might look like. I guess it would probably be called the "Root Beer Float Your Boat" and it would be exactly like any other root beer float you've ever seen in your life except that it has a tiny sailboat in it and it costs $85. Plus, when you notice the cute little toy boat and remark to your fellow diners "Oh hey, a tiny sailboat! How clever!," the waiter runs over to your table and informs you that it would be more accurately described as a "schooner" since it has two masts, and also that you shouldn't have worn white since it's after Labor Day. God I hate that place.

But Jaxson's is cool. Go there. Oh, I almost forgot. It's not cheap. The sundaes cost like 15 bucks but they're huuuuuuuge. The float costs $9. 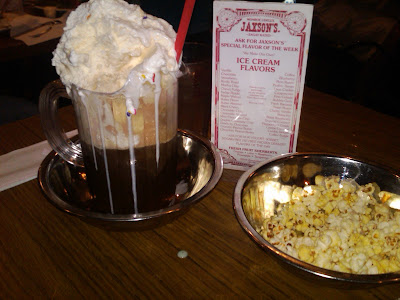