Mr. Yum Asian Cuisine. Sounds pretty standard, right? I've gotta tell you, I don't like that as a theme for a restaurant. I don't like it one bit. You know I'm about to tell you why. Here comes one of my rants that has practically nothing to do with reviewing the restaurant!

You wouldn't have a North American themed restaurant, would you? You wouldn't have a restaurant that touted Caucasian Cuisine, am I right? See, this is what's wrong with America, but also highlights how Asians are using our ignorance against us in their evil plot to take over the world. Now I'm displaying a similar ignorance in lumping them all together, but hey, give me a break. I'm a gringo, too!

Please use a generic Asian accent as you read this. "Hey whitey, you like Chinese foo', you like sushi, you like fried rice, you like Pad Thai? We give all to you in one rest-a-rant."

I can't blame them. For years, anyone who was, uh, Jesus, I don't even know what to call them. Goddammit. I get in arguments with Indian friends of mine who say that they are ethnically Asian when I say that they are Caucasian. I sure am argumentative. Point is that people have, for generations, called everyone who's like that "Chinese." It's like calling everyone who's Hispanic "Mexican." For white people, this does not happen, for some reason. Maybe it does and we don't know about it.

So, what about all of the other "Asians" who don't get the designation that was once known as "Oriental?" Russia is in Asia. Pakistan. Afghanistan. Turkey. India. Yemen. These are all countries located in Asia. Man, this is making me even more upset now that I'm typing it out.

Anyway, you might be disappointed to learn, after all of that, that Mr. Yum has no Yemeni food anywhere on the menu. At least, not that I know of. I didn't look at the menu even once while I was there, since my friends ordered for the entire table. I also don't know what anything costs, because one of my fellow diners (a totally sweet dude) picked up the tab. I am not complaining about either of those things. Frankly, I'd be elated to live a fantasy life where tabs were picked up and I didn't know the price of the things I consumed. Actually, my life was like that until fairly recently, come to think of it.

To the Internet for pricing information! Chicken Pad Thai is 14 bucks. Red curry is the same. Appetizers range from 4 to 20 dollars, but you could easily be satisfied by sharing a few between two diners. The prices are fair and the quality of the food is very, very good. Beer ranges in price from $4 to $6.50. That makes me happy.

Ha ha, I just checked for desserts and they're listed under "desert." I have to keep reminding people that "dessert" is spelled with two esses because you want more of it. We had the very Atkins-unfriendly Twinkies Tempura. I don't think frying Twinkies is necessary. But one could say that I shouldn't crush Oreos up in my ice cream or order ten items when I go to Taco Bell.

Service at Mr. Yum is excellent, though the friends with whom I dined know the owner and he waited on us personally. It's possible that I had a slightly better experience than the average diner, but the place was packed on a Thursday night and people continued to arrive and fill the tables throughout the evening. We spent like 3 hours there, so we saw a fair amount of table turnover. Atmosphere and decor are hip and exciting. Bathrooms are spotless and for some reason I really liked the way the paper towels were rolled up - 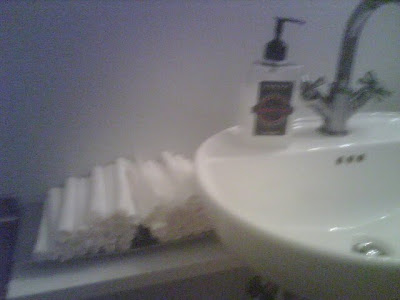 As I finish this post, I am remembering that when I lived in Singapore, my host father once offered to bring me home some "western food" for dinner. It took me a little while to understand what he meant, because it came out as "westan foo." Even after I figured out what he saying, I had no idea what that could possibly mean, and it turned out that it was fried chicken, baked beans and cucumber all thrown together in a box that he got at a hawker center, which is basically a Singaporean food court. I suppose that's exactly the same thing as what I complained about throughout this post, but there's no way I'm starting over from scratch. Uh, withdrawn?
Posted by Colin at Thursday, October 22, 2009

Not too long ago I saw a restaurant advertising spanish and mexican cuisine. I was very angry at this, but I guess it makes sense if some people refer to every one of latin or hispanic descent as mexican. My wife thought that it was silly to be upset by this.