Let me know when this website works, because I'd like to get another look at the prices. For now, it's just some post-modern, black screen. Deep. Probably meant as some sort of metaphor. Life is meaningless. Food will not fill the gaping hole in our souls. You know, that old chestnut. I guess the alternative would be a photo of a cake with a big penis between two breasts. That will make sense later.

A good buddy of mine recently celebrated his birthday at George's in the Grove. It's one of his usual dinner spots, so I was happy to try it out after hearing him talk about it for so long. It's kind of a tourist trap for locals, if that makes any sense, but it's worth checking out. George's is certainly waaaay less annoying than Barton G. It's been voted "Best Restaurant for Celebrating a Birthday" by the New Times, and there were at least 6 other tables who celebrated on the same night that we did. They do make it fun with loud music and dimmed lights accompanying the cake presentation. It's a lot better than the usual restaurant birthday song that makes one embarrassed to be a member of the human race.

From what I've read on line, you can make a reservation, which they'll take over the phone, only to pretend it never existed once you've arrived. That kind of sucks. I strolled in with the first couple of attendees that night and we waited for at least 20 minutes before being seated. That wouldn't have been so bad had there been someone to serve us a drink at the bar. I guess people sit at the bar and eat sometimes, but the restaurant is so packed with tables that you can't even stand at the bar without being completely in the way of the waitstaff. While you're eating, with your legs pinned beside the table's (legs), you are regularly bumped by waiters on the way to the kitchen and diners on the way to and from the potty. I hope they're washing their hands.

The lack of pre-dinner drink was quickly excused when we were presented with glasses of complimentary champagne, one of the restaurant's signatures. It's a nice touch and makes any meal at George's feel celebratory, I am sure.

The food at George's is good. It's not great. It's not surprisingly good. Nor is it disappointing. It's just adequate, I think. The disappointment for me came when, after having pointed directly at the Duck Confit Pizza on the menu to avoid confusion, I was served the regular Duck Confit dish (which is located far away on the menu, by the way). Life is so hard sometimes...

I have a policy of not returning food unless I plan on not eating anything, so I told the waiter that I would prefer not to be charged for the dish I was served, but rather the (cheaper) dish I had ordered, and that I did not want to make a big deal of it. He took the plate away immediately, at which point the diner across the table offered to split his pizza with me (We were a large group and we had only just met. It was, indeed, a gracious offer.). I agreed and canceled the Duck Confit Pizza. I am basically paranoid about sending food back to the kitchen and waiting to ingest a mystery ingredient (bodily fluid) that has been surreptitiously added to my dish. Think "Road Trip" French Toast -

God, I love the internet.

Other diners ordered fish dishes that were pretty average. Mostly, the ambiance and company made for a delightful evening, and the atmosphere at George's is so relaxed that you're comfortable hooting and hollering and having a great time. It really is perfect for birthdays in that regard.

When dessert came, it was clear that we were celebrating with a special birthday boy. The song they blasted seemed much louder and cooler than the typical YMCA and Dancing Queen that had been played for others, and the cake was bigger and more elaborate than ones we had seen presented at other tables.

Here is a photo of both the cake and the birthday boy. His face has been obscured for his protection. Let's give him a pseudonym like, oh, say, Jeff Boden. 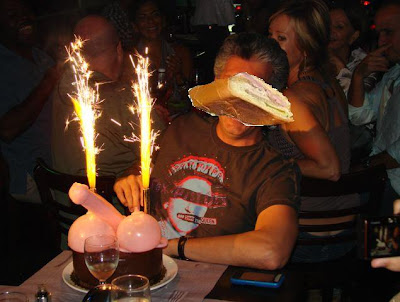 Aside from the delicious dessert, when the bill came, of course, we got a cluster fudge. That's what always happens when you have a big group. Everyone feels cheated and, even though the birthday boy was the biggest earner at a table that had among its members grad students and the underemployed, we all paid for him. So, I was a little annoyed that I spent $80 for my share and ate only half a pizza. It's a good thing I drank a LOT of the wine. I had to point out that we had still been charged for the Duck Confit, but that wasn't surprising. That's why you must always check the bill at the end of your meal. The dessert was tasty, but I think they charged us $7/person. That's a little too much.

I know it sounds like I didn't like it that much, but I really enjoyed George's. You should just know what to expect before you go there.
Posted by Colin at Friday, October 09, 2009

This is a great wrap-up of the experience at George's. We didn't do the B-day celebration, but did come in a large group. We also had troubles with the bill and found the food average. Although, I'm not sure why you would allude to the heinous part from Road Trip with the French toast; I actually found myself repulsed for having swallowed my meal at George's after viewing this video. Keep the great reviews comin'!