My buddy Dan and I ate at this particular Big Louie's location after catching a movie at the old fashioned Sunrise Cinemas Gateway theater just down the street. It's probably going to go out of business soon (the theater). I took this photo with my phone, so it's pretty crappy, but I wanted to have some proof of what their famous garlic bread looks like. There's one roll left and everything else is garlic with a dusting (read: avalanche) of Parmesan. I don't understand how restaurants make money. 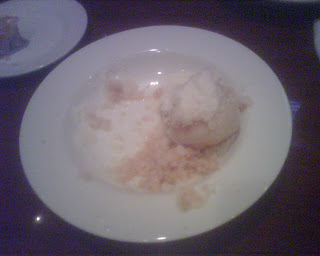 I ordered a buffalo chicken pizza that was delicious and was cooked to order in about 10 minutes. That was pretty awesome. Dan got chicken parm and I got to try it and it was very good. I'm sorry, James, to have so little about which to complain. I am much happier when I've spent my money on an enjoyable eating experience, though my reviews are less interesting when that happens.

Of note is the fact that the restaurant is open really late. On a Saturday night we were able to order our food just before midnight. It's not fancy, but this Big Louie's had pretty nice atmosphere. It was really clean. The staff was friendly. The service was quick and polite. These are all impressive to people who live in Miami.

The highlight of the night had to be the weird dude who showed up with an extremely young looking prostitute. I'm thinking now that she looked so young it was probably illegal. Hmmm. He really wanted to eat outside, since he probably wanted to do something romantic, so he left when they told him they wouldn't serve him outside. He came back and ate inside eventually. Probably when he realized that nothing else was open.
Posted by Colin at Monday, March 24, 2008