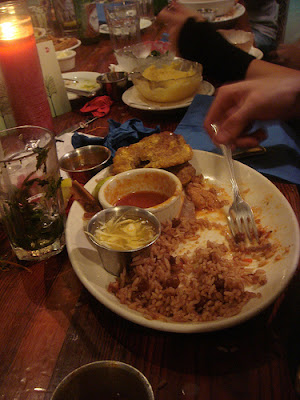 Now, you might say to yourself "hey, I expect pretty good service from a Haitian restaurant on Miami Beach while I'm dining with 20 of my friends". Well, you would be wrong. Very wrong.

We really should have had more than one server for such a large group, since an average dinner party is probably 2-4 people. So, my math suggests that we should have had 5 servers. Vivek also should have gotten a reservation more people. What a bad, bad friend. Likely this is a big factor in Avi's imminent departure from MIA. I think we were at the restaurant for a good 3 hours, but the good news is that the per person cost of the meal was $30. That's pretty good considering how much beer I drank.

The Goat Tidbit Episode - Someone at the table (all I remember is that he was extremely handsome) was served a small plate of goat that did not seem at all stewed, to that handsome man's surprise, but his brother told him it was his dish, and so he ate it. He was then very confused when people asked him if he was eating goat tidbits. Hilarity ensued. Turns out it was an appetizer.

Incidentally, I had ordered the stewed goat along with brown rice and beans (recommended to me by our waitress as the more traditional side versus white, fragrant rice). Well, as my brother said "traditional doesn't always mean good". And that's probably doubly accurate when talking about a place like Haiti. No offense to my Haitian readers. The white rice was better. The Englishman to my right had ordered some with his grilled chicken, and so I was fortunate to grab a couple of bites.

On that same note, I imagine that the Ethiopian meal I had in Washington, D.C. a couple of years ago was a bit nontraditional in that there was lots of meat in the dishes. In most poorer countries, there's a lot of rice to fill up the diner, since meat is not as cheap and plentiful as in the good old red meat capital of the world, the U.S. of A.

Back to Tap Tap. The fried plantains (similar to Cuban tostones) were delicious and better than many of the greasy tostones I've had (David's Cafe, Versailles). The Presidente beer was ice cold. The stewed goat (Kabrit Nan Sos, I actually remember that) reminded me of mutton. Mutton, as we all know, is NOT goat, rather it is mature sheep meat. Lamb, on the other hand, is the meat of a young sheep (less than 12 months old). I'm glad we cleared that up. Anyway, the stewed goat was good and it came with a nice sauce. That's about all I have to say about that.

Just wrapping things up, I thought that the food was ok at Tap Tap. Many of us had the insipid fried malang as an appetizer. Malang is...I don't know. I can't find it on line. It might mean flour. I know what you're thinking, because I thought the same thing. "Malang sounds like an Indonesian or Malay word." Well, we're right. Malang is a city in Indonesia, in fact, it's the second largest on East Java. Kudos to us. Mmm, kudos... 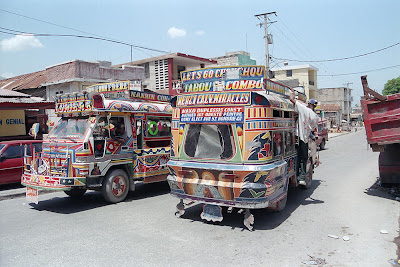 You've gone too far this time...