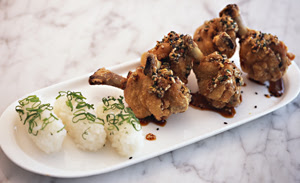 When I was born, the doctor held me up in front of my exhausted mother, and said "Mrs Norton, you have a beautiful baby boy". And while it is likely that he said this to most new mothers, he did not, as far as I know, have cause to contact social services to warn them about the half boy, half ape-like creature he had just delivered.

I am not beautiful, I know that. Cars do not slow down in the middle of the road when I walk past. Nobody has ever asked me if I am a model. If I have had any secret admirers, then they have done an undeniably excellent job of keeping themselves secret.

However, I have a beautiful wife who is definitely not married to me for the money and power. I have taken my clothes off in front of various people, and thus far, nobody has vomited on themselves at the very sight. It's fair to say that like most of you, I am an average looking person.

Until that is, I enter the Sagamore Hotel.

Everything that is good about South Beach, is here. But, like all good microcosms, the bad of Sobe is here in equal measure. Nobody who is as amazing as a Sagamore person would give a normal person (normo's, as I believe they call us) the time of day. They absolutely have every right to ignore our existence.

Which is not a problem, but for the fact that that the staff at Social, the hotels restaurant, are infected by the same superiority complex. On a recent visit, our waiter was not just bad- - he was obnoxious, disinterested, unfriendly and unhelpful. Any questions that we had about the menu, or the fact that our food took 45 minutes to arrive were greeted with the same response: He registered us with a look that would not have been out of place had he just caught me keying his car while simultaneously enjoying a menage-a-trois with his wife and mother.

It's an uncomfortable analogy, but I really cannot overstate my loathing for the experience at Social. The food is dull at best: Greek salad (yawn), Ceviche (big wow) and meats are all served up in a way that, at best, is pretentious, and at worst, is basically taking the piss out of the people that are prepared to pay $20 and upwards for an appetizer.

I challenge anybody to find a meal on the menu that you can look back on and describe as above average. All of the dishes are exactly as you expect them to be, just a bit smaller, and slightly less interesting.

All in all, this restaurant and hotel need to understand that they are not even half as good as they think they are. They are not in the same class as the New York, London and Paris establishments that they aspire to be like. And even locally, you will get a better up-market hotel eating experience at The Shore Club (Ago & Nobu), The Delano (Blue Door), The Raleigh and the Townhouse (Bond St. Lounge). Not one of these is further than three blocks from the Sagamore, so there really is no excuse to waste your time with this entirely boring experience.