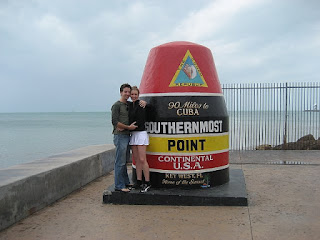 Seven Fish is the kind of place that everyone likes. I have heard only positive things about it. A quick story to show what a class joint it is-

My girlfriend and I headed to Key West for the weekend after Valentine's Day, and I called well in advance for a reservation on Friday, 2/16, assuming it would be tough to get a table. When we arrived, there was no record of our reservation and I told the hostess that I had received confirmation by email and phone. She looked the list over once, and said "ok, come with me". She sat us immediately without making the slightest fuss. That is exactly what she should have done.

The wait staff is professional and courteous, and the service is conscientious and quick.

I have to tell you that I think the way to get the best value at Seven Fish is to order maybe three appetizers between two diners. I certainly didn't want to look cheap on my Valentine's dinner, but that would have been the smart play (short term, that is). The appetizers are large and cost between $8 and $9. We had the crab cake and the ceviche to start. They were too delicious to have only a few bites, and we rendered ourselves rather full by the time our entrees arrived.

Marguerite and I both ordered specials, and I have the feeling that the specials always sound so enticing at Seven Fish that you can't pass them up. She had wahoo with mango chutney and I had snapper in a light curry sauce. Just writing about those dishes is making me salvate. You just cannot go wrong with this restaurant. I recommend it to anyone visiting Key West.

The only negative thing I have to say about Seven Fish is that they don't have souvenir matches. I know people don't smoke much anymore, but c'mon, matches! That's one of my favorite aspects of eating out. Plus, if your roommate were my brother, you would want to have LOTS of extra matches lying around the house, you know, for the bathroom. Sorry, I don't want you to lose your appetite. But seriously, that dude drops some bombs.
Posted by Colin at Wednesday, February 21, 2007

I never ate at Seven Fish...But back in 1987 when me and my family traveled to Key West, we went to the MCDONALD'S on 3704 N. Roosevelt Blvd., and I had what could have been the greatest McChicken, McFrappe and Sausage McMuffin with egg that I have ever had...And YES, they did sell breakfast items in mid-afternoon....4 STARS