Boden, after(?) hot and sour soup, with Sean 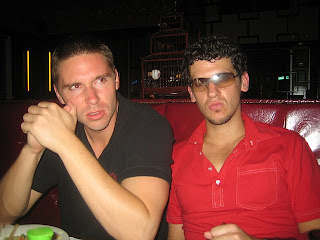 As I sat at our table about a half hour into our meal with a frown, my friend and fellow grublogger, James Norton, looked at me and realized immediately what was the matter. I had nothing about which to complain.

James consoled me and pointed out that, although criticism is the best part about being a critic, a fair amount of my blog entry needn't be about the restaurant itself. What he said after that, I don't really remember, thanks to the fairly high number of beers I had consumed up to that point (including some delicious Tiger beers, which were a nice surprise to find on the beer menu).

Tiger Beer is, of course, Singaporean, but Miss Yip has a selection of beers from around Asia: Singha, Sapporo, Tsing Tao, to name a few.

I took a page from the Chinese and rudely left the table to get a shot at Buck 15, the bar that is located above Miss Yip. It's almost too easy to pass up. The bathrooms are shared between the restaurant and bar, so you just run up the stairs and grab a shot, sneak back to the table, and no one's the wiser...unless you announce to everyone that you're going to Buck 15 for a shot and invite people to come with you.

What did we eat, you ask? I thought you'd never! For starters, we ordered the Mama Yip dim sum platter, the pan fried pork dumplings, and the pan fried chicken dumplings. Boden got some soup or something, hot and sour, I believe, to go with his sour personality down at the end of the table. He didn't offer to share, and neither did we. He is only now learning about the deliciousness of the appetizers as he reads this review! All three were big hits. The dim sum tasted as good as the ones I had in Hong Kong, and the fried dumplings as good as any I have had during my travels around Asia. That's all true. Seriously.

The main courses were presented nicely, and the portions were adequate but not obscene, as is often the case at America's eateries. It's nice on a Saturday night not to feel guilty about wasting food, as the doggy bag is not an option when the dinner party is headed out to a bar or club afterward.

My favorite was the Mongolian Beef, Paul a.k.a. Mr. Miami's choice, most of which we ate when he left the table to visit the restroom (or was it Buck 15 for a jager bomb?!). That's the kind of thing you think is hilarious when you're drinking, but would be totally obnoxious when sober. I had the Kung Pao Chicken, a dish made famous during an episode of Seinfeld ("George likes his chicken spicy.").

Main courses run about $16 on average, and the entire meal (with tip) was about $37 a head. We had a lively group of 8, including a pregnant woman and a grad student, so that ain't bad. Service was very good. The food was brought to our table before we even had a chance to think about it, of course, I did run upstairs for another shot at Buck 15 between appetizer and main course...

Turns out we could have used doggy bags, since we didn't even leave the building after dinner and headed right up to Buck 15. DJ Foxx spun her usual mix of 80s dance classics and we hung from the rafters (they're actually joists). 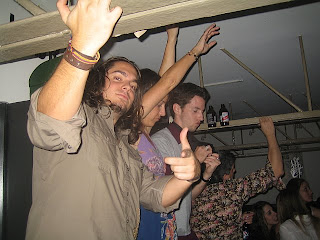